Congratulations to Dr. Ida Meftahi, Recipient of the 2018 Latifeh Yarshater Award for her first book, “Gender and Dance in Modern Iran: Biopolitics on Stage”

Roshan Cultural Heritage Institute is proud to announce that Dr. Ida Meftahi’s first book, Gender and Dance in Modern Iran: Biopolitics on Stage (Routledge, 2016) won the 2018 Latifeh Yarshater Award for the best book in the field of Iranian women’s studies. The award was given out at the Association for Iranian Studies Twelfth Biennial Conference that took place at the University of California, Irvine, on August 14-17, 2018.

Named in honor of Latifeh Yarshater and her lifelong dedication to the improvement of Iranian women’s human rights, this award is to encourage scholarship in Iranian studies focused on the condition of women in Persian-speaking societies and to promote women’s rights in these societies.

Gender and Dance in Modern Iran: Biopolitics on Stage investigates the way dancing bodies have been providing evidence for competing representations of modernity, urbanism, and religiosity across the twentieth century. The book, which research was supported by a fellowship from Roshan Cultural Heritage Institute, traces the dancing body in multiple milieus of performance, including the Pahlavi era’s national artistic scene and the popular café and cabaret stages, as well as the commercial cinematic screen and the post-revolutionary Islamized theatrical stage. 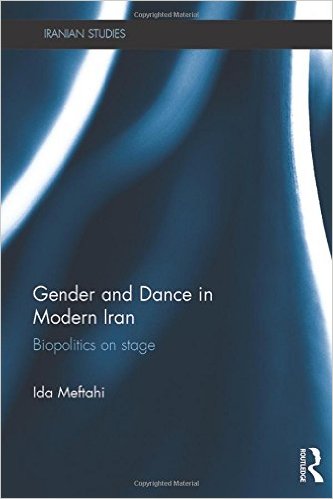 Dr. Meftahi has been a Visiting Assistant Professor in Contemporary Iranian Culture and Society at the Roshan Institute for Persian Studies at the University of Maryland, College Park, since 2014. In addition to teaching, she is the director of the “Lalehzar Digital Project” as well as the faculty advisor for Roshangar: Roshan Undergraduate Journal for Persian Studies. Dr. Meftahi holds a Ph.D. in Near and Middle Eastern Civilizations from the University of Toronto (2013) and an M.A. in Dance from York University, Canada (2007).

Roshan Institute for Persian Studies warmly congratulates Dr. Meftahi for this award and wishes her continued success in her academic work.

Learn more about the Association for Iranian Studies