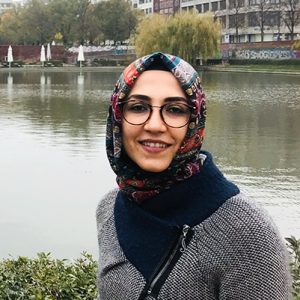 Roshan Cultural Heritage Institute is pleased to welcome Dr. Songül Gündoğdu as the new Elahé Omidyar Mir-Djalali Postdoctoral Fellow in Iranian Linguistics, in support of the “Syntax of Nominal Linkers” project led by Dr. Arsalan Kahnemuyipour, Associate Professor of Linguistics, at the University of Toronto.

Dr. Songül Gündoğdu received her M.A. and Ph.D. in Linguistics from the Department of Linguistics at Boğaziçi University in Turkey. Her main areas of research interest are morphosyntactic aspects of Iranian languages, such as the Persian Ezafe, which links the noun with its modifiers in an iterative manner. She is a native speaker of Kurmanji (Northern Kurdish) and Turkish, and has conducted joint research on the comparative analysis of linking markers between these languages.

Dr. Gündoğdu joined Professor Kahnemuyipour in September 2019, for a two-year term, to work on the first phase of his five-year project, which aims to investigate the syntax of nominal linkers across languages. Starting with the better-studied Persian case known as the Ezafe, in its first stage, the project takes on a systematic comparative investigation of several Iranian languages to establish the properties nominal linkers in each of these languages possess. The project team is currently compiling data on several Iranian languages–Kurmanji, Zazaki, Gilaki, Sorani Kurdish and Ossetian–to provide a cross-classification of nominal linkers based on a detailed study of their properties in these languages.

Read more about the Syntax of Nominal Linkers project